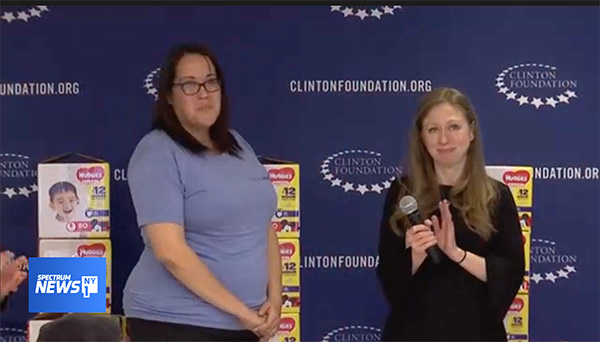 Chelsea Clinton was one of many volunteers assisting with diaper distribution in support of The Hopeline’s mission to help families who cannot afford these much needed supplies.

Read the story and watch the video here > 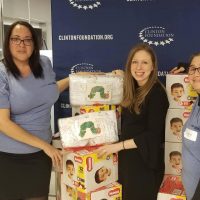 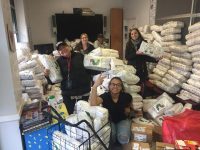 by Maria Cintron of Hopeline

Throughout America there are many known struggles but one of the Silent Crises in America is the need for diapers. Out of 5.7 million children from low income households, l out of 3 suffer from a lack of diapers.

The cost for any family with a child aged 0-3 years can cost up to $100 a month in diapers. For a family with limited incon1e, affording diapers can prove an extremely difficult task. In making the situation even more difficult are the government programs such as SNAP and WIC do not allot money for diapers.

The benefits families do receive are lo,v, and not enough to sustain regular living expenses leaving with them zero money for diapers.

The challenge that parents face having to deal with financial restraints and lack of other solutions to acquire diapers, parents diaper their children less, leaving their children in the same diaper for more than a day. Sadly, the insufficient diapering potentially leads to health risks from urinary tract infections to skin rashes, which can only put an additional burden on the health care system.

The peril of being in soiled diapers for long periods and suffering health risks can lead to emotional and behavioral HopeLine also provides classes in ESL and citizenship issues as studies have demonstrated.

The sight and anguish of witnessing your child in pain and discomfort lead to added stress for parents.

Insufficient resources of diapers also lead to fa1nilies being deprived of early childhood education because most childcare centers cannot accept children when they are not accompanied with diapers. In turn, many parents cannot go to work or school because their child has to stay home.

According to a study performed by UC Berkley Center for Labor Research and Education, 2011, is that early childhood education is important because children who receive it are 2.5 times more likely to go on to higher education.

Within the harsh reality of the silent diaper crisis, parents are looking for help. But from where?

Places like diaper banks are the most ideal for families. A diaper bank is a nonprofit organization that collects, stores, and distributes diapers to families who cannot afford them. Although diaper banks are scattered throughout the states with sadly, only one available in one of the most poverty-stricken New York boroughs, the Bronx.

Within the Bronx is the South Bronx, one of the poorest congressional districts in the nation. Over 30% of the South Bronx residents live below the poverty line which makes it one of the hardest hit areas for families suffering from lack of diapers.

One small organization is ready to help. It is located in the heart of the South Bronx, The Resource Center for Community Development, Inc. It is known as The Hope Line.

It started the process in creating a diaper bank in which families will receive assistance as they do with a food bank and it envisions helping an average 75 families each month, up to 900 families a year.

In order to sufficiently help each family, they need $6,000 a month dedicated to the Diaper Bank, only $80 per family will buy a typical month supply for families, up to 300 diapers depending on needs of the child.

For us to achieve the goal of helping up to 900 families in 2015, Hope Line is looking to establishments to host diaper drives and individuals to donate their unopened and new packages of diapers for which they no longer have use. And to donors who want to fund this noble cause, please visit our website at www.thehopeline.org.

Call or email your federal and or state representatives and inform them of the DIAPER NEEDS: a silent crisis Don’t know who they are? Go to www.CommonCause.org (search for ‘’who represents me?’’)